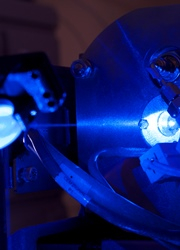 Biomarkers can be used to detect a change in the physiological state of a patient that correlates with the risk or progression of a disease (eg. Alzheimer’s disease) and/or to assess chemical exposure and the cumulative, adverse effects of toxicants in ecotoxicology. The discovery and the validation of new biomarkers raise many both analytical and instrumental challenges that ANABIO-MS group aims to tackle according to three objectives:

Besides new analytical methods to simultaneously quantify protein biomarkers and small molecules (e.g. endogenous compounds, micro-pollutants, metabolites) are developed with the Traces group in order to evaluate complex interaction effects on human health, such as those induced by mixtures of environmental contaminants